Nethra Vaman grows to a height of less than 2.5 meters. It was evaluated for about 10 years and found unique with respect to plant height, compact spreading habit, nut size and apple colour and quality. Though the variety is not a much good yielder it can grow well even under shade conditions. The nuts are small in size with a weight of less than 7 g. The apple colour is good, attractive and has less fibre content. The variety is pruning responsive, long flowering duration variety, and flowers in the first year of planting. It has stem galling like coffee. It can be suitable for home gardens. It best suits for the one who is fond of bonsai and opts for pot culture. 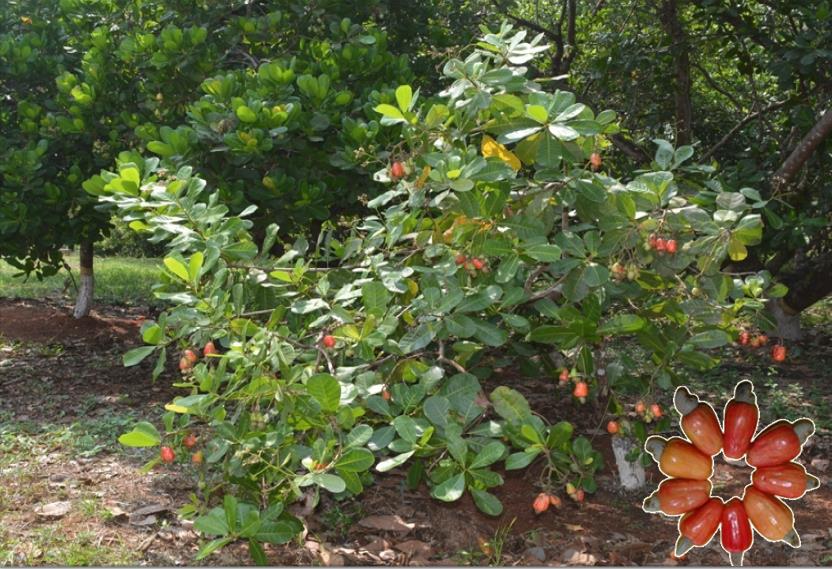 A new jumbo nut hybrid H-130 which was superior in yield (3kg/tree in 3 years of planting) with cluster bearing (10-20 nuts/panicle) and bold size (12-13g nut weight) and big apple (>100g) was evaluated and released for cultivation and performance evaluation in farmers field. The hybrid is highly precocious, early flowering with long fruiting duration. Plant is vigorous but sparse canopy and having large leaves and big inflorescence with strong 8-10 rachis. Has high number of bisexual flowers and fruit set is as high as more than 70 nuts per panicle in the initial stage and subsequently 10-20 nut retention per panicle. The hybrid responds well to pruning and is suitable both for ultra-density planting and normal spaced plantations. Hybrid has high shelling (29.9%) with big kernels – 3.5 – 5 g a rare type among released varieties and falls under W-130-150 category kernel grade. The kernel protein is 21% and fat 46% and other usual mineral contents. 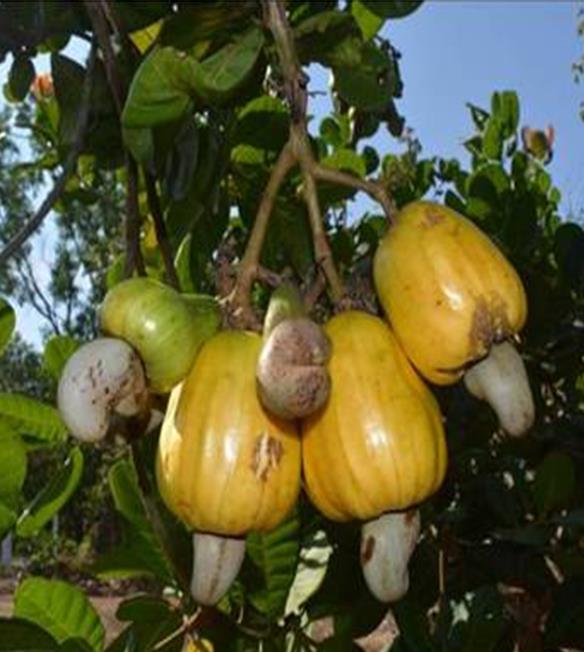 This variety was released during March 2006 for coastal region of Karnataka. This is having midseason flowering habit (Dec-Mar) with a flowering duration of 60 days and has potential to escape from the attack of the tea mosquito bug (TMB) under low to moderate outbreak situation. But the regular insecticidal spray against TMB is essential under severe out break situation. The number of fruits per panicle (bunch) ranged from 4 -13. The average yield on 13th year was 10.7 kg/tree with highest yield of 19 kg/tree. The nut and kernel weight are 7.4 g and 2.2 g respectively. The shelling percentage is 30.6 and kernel grade conforms to export grade W240. The apple colour is pinkish orange and juice content is 67.5%. This variety is very popular among the farmers of Dakshina Kannada District of Karnataka and also in neighbouring districts of Karnataka and Kerala. 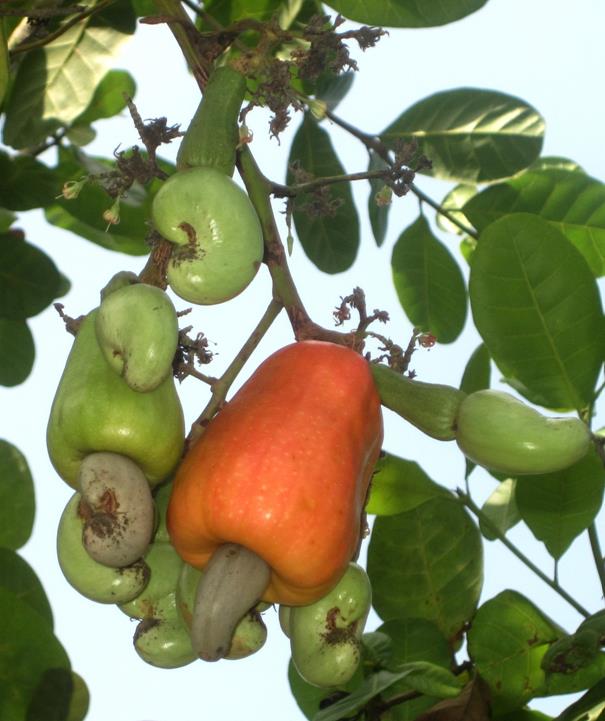 This variety was released in the year 1989. This is a selection from segregating progeny of germplasm 3/8 Simhachalam (VTH 107/3) originally a collection from AP. It is a late flowering type (December – February) with a flowering duration of 82 days. The number of fruits per bunch is 5. The yield, on an average, is 10 kg/tree. The nut weight is 7.6g. The shelling percentage is 28.8% and the kernel grade conforms to export grade of W 210. Apple colour is yellow. This variety is withdrawn from recommendation for cultivation. 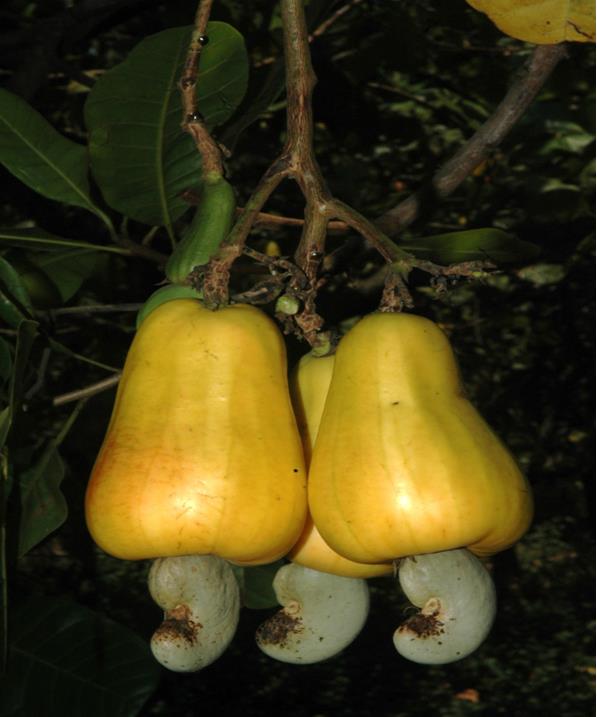 This is a selection from the segregating seedling progeny of 2/9 Dicherla (VTH 40/1) originally a collection made from Andhra Pradesh. This variety was released in 1989. It has a mid season flowering habit (November – January) with a flowering duration of 74 days. The number of fruits per bunch is 3. The average yield is 9 kg/tree. The nut weight is 9.2g. The shelling percentage is 28.6% and kernel grade conforms to export grade W 210. Colour of apple is pink. 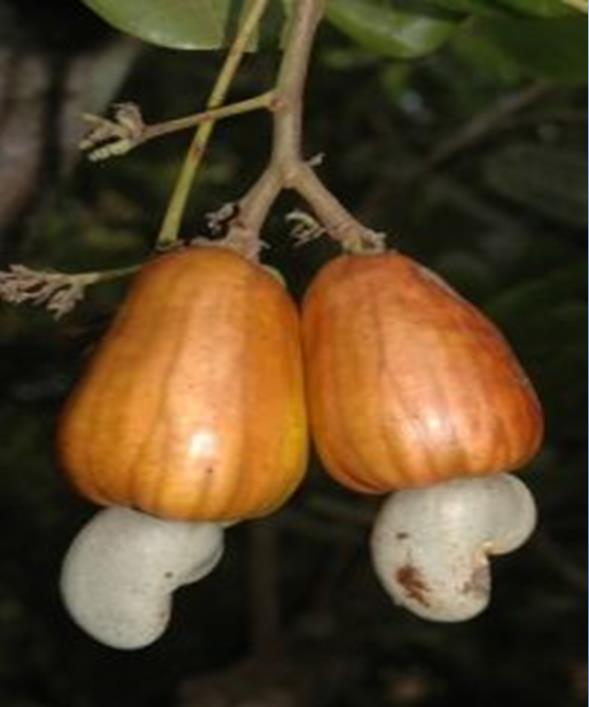 This is a selection from the germplasm collected from Taliparamba in Kerala (8/46 Taliparamba) and released by ARS, UAS in 1984. The variety has 2-3% of bisexual flowers. The average yield is 16 kg/tree. The duration of harvest is long (about 110 days). The nut weight is 6.7g with shelling percentage of 30.7%. The colour of apple is yellow. Kernel grade is W210. 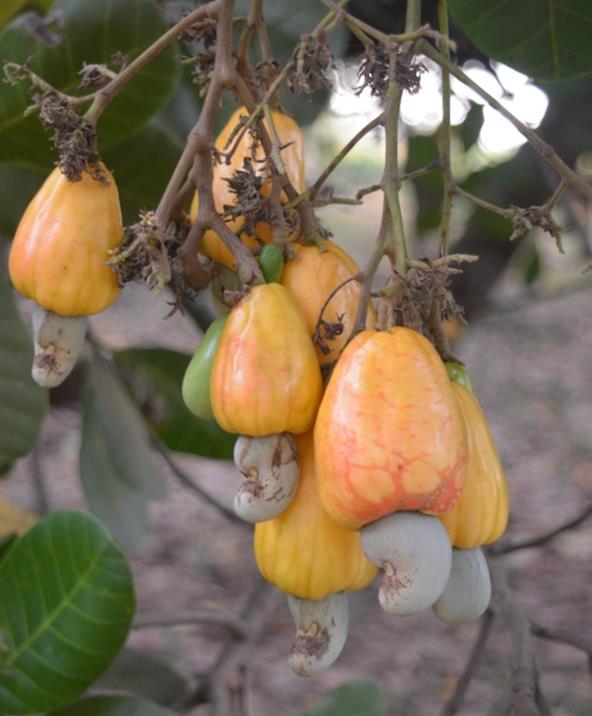 This is a selection from germplasm collected from Guntur in Andhra Pradesh (3/67 Guntur). This variety was also released in 1984. The variety is a late flowering type (December to March) with very short duration of harvest (85 days). The yield is about 9 kg/tree. The nut size is medium with 6g nut weight and shelling percentage is 30.5. Colour of apple is light red. Kernel grade is W 240. This variety is withdrawn from recommendation for cultivation. 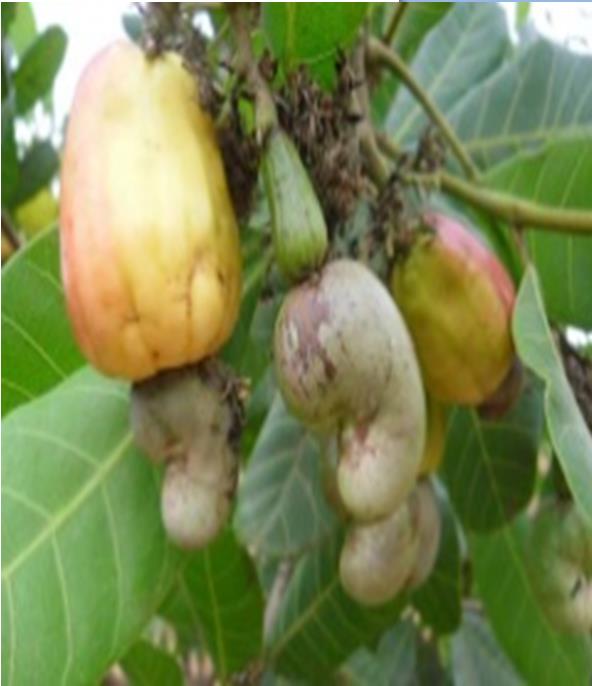 It is a selection from 5/37 Manjeri and released in 1993. It is early in flowering (November – January) and fruiting period is very short (50-60 days). The fruiting is from January to March and sometimes starts from last week of December. It is a high yielding variety with average yield of 14.7 kg/tree. The nut size is medium with nut weight of 7g. The shelling percentage is 30% and the kernel grade conforming to W 210 grade. The colour of apple is red. 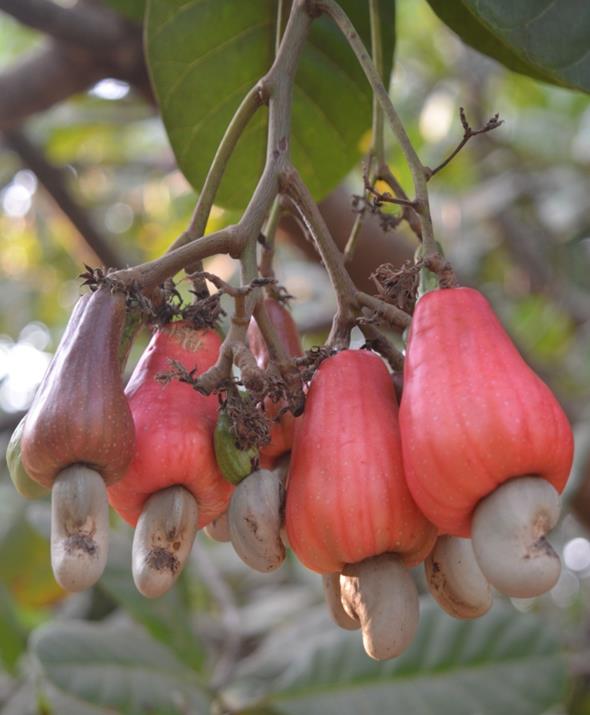 It is a selection from 2/77 Tuni Andhra and released in 1994 for general cultivation. The average yield is 9.5 kg/tree. The nut size is medium with 7.2g nut weight. Shelling percentage is 31%. Export grade of kernels conforms to W 210 counts/lb. The colour of apple is yellow and apple weight is 75g. 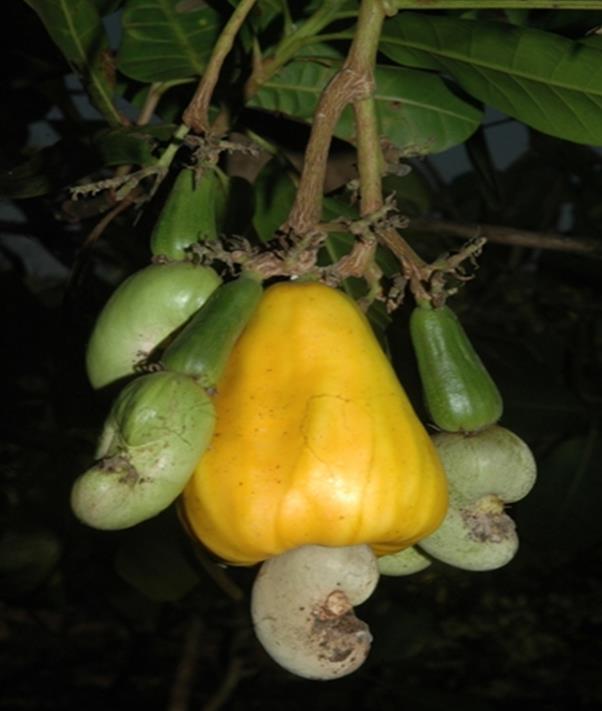 This is a selection from Nileshwar 2/27 (T.No.25) and released in 1995. This is a medium duration variety. The average nut yield is 10.5 kg/tree. The nut weight is 9g and shelling percentage is 32.8%. The kernels are suitable for export with more than 85% of kernels coming under W 180 export grade. Apple colour is yellow. It is a selection from 8/46 Taliparamba, a germplasm collection from Taliparamba in Kerala and released in 1993 from ARS, Chintamani. This variety is recommended for plain region of Karnataka. Its flowering period is from January to April with 2-4 nuts per panicle. The average yield of this variety is 7.2 kg/tree as against the 2 kg/tree of the local varieties. The nut weight is 6.9g with shelling percentage of 31%. The kernel grade is W 210. 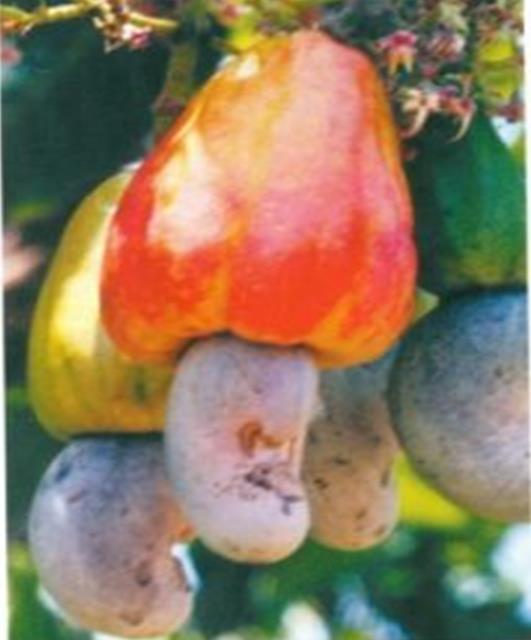 It is a seedling selection from ME 4/4 of ARS, Ullal and released in 2007 from ARS, Chintamani. This variety is also recommended for plain region of Karnataka. The canopy type is compact and with intensive branching. Its flowering period is from December to January. The average yield of this variety is 12.4 kg/tree. The nut weight is 7.9g with shelling percentage of 30%. The kernel weight is 2.35 g. The kernel grade conforms to W 210. The colour of the apple is red purple with average weight of apple of 70g. Juice content is 60%. 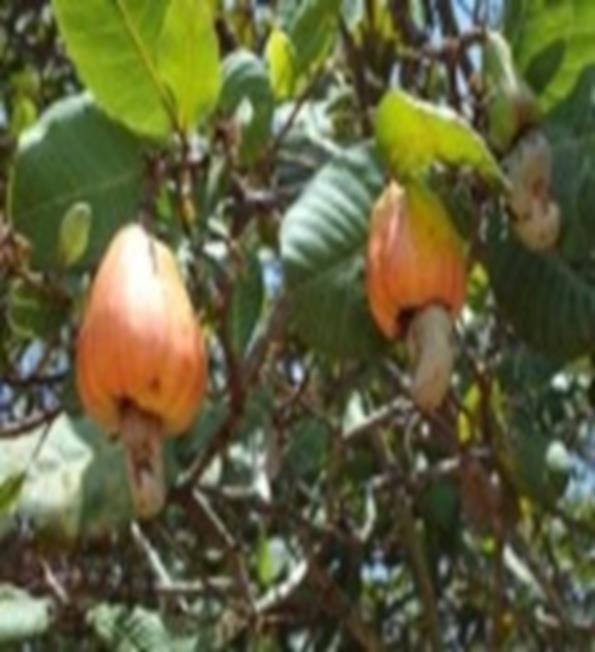